How to Make Vegan Sushi At Home

Vegan food is gaining popularity in the United States in recent years. In Japan, where the most popular foods like sushi, sashimi, and tempura use an abundance of seasonal fish, a vegan diet is also attracting people. Not to mention, vegan sushi is also becoming extremely popular. You’d ask, can you make sushi vegan? Sure you can!

Sushi Can Be Vegan!

Many of you might think of fish when you hear the dish “sushi,” like tuna, salmon, and shrimp. However, you can create delicious sushi only using vegetables and even fruits. For example, carrots, purple cabbage, asparagus, and cucumbers are great ways to add vibrant color to your sushi. If you are adventurous, add zesty fruits like mikan oranges or yuzu for surprisingly refreshing sushi! 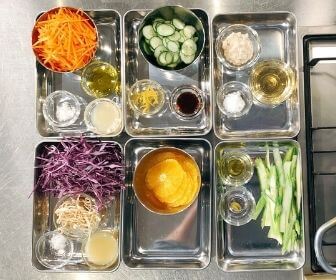 The key to making good sushi is to make delicious vinegared rice, and you can basically use any ingredients as toppings. In fact, the ingredients you use are flexible. Last night’s vegetable stir-fry or leftover vegetables from the salad you made for lunch can quickly turn into ingredients to make your vegan sushi!

You might only know sushi rolls, but you can make quite a few types of sushi. Here are six kinds of sushi that are widely popular in Japan.

Nigiri sushi consists of thinly sliced toppings served on top of a small chunk of sushi rice. Fresh fish is the typical topping, but you can make it vegan using paprika, tomato, eggplant, avocado, and enoki mushrooms. Since it requires technical skills to make nigiri sushi, it is often eaten at sushi restaurants and rarely at home.

As the name suggests, maki sushi is sushi rice and sushi topping rolled and wrapped in nori seaweed. There are several types of sushi rolls, but the most popular one to make at home is “hand-rolled sushi” without using makisu.

Gunkan maki is similar to nigiri sushi. The difference is that seaweed is wrapped around a small chunk of sushi to make a base, and topping ingredients are placed on top. It has its unique name because its shape resembles a battleship.

Vinegared rice is filled inside of a sweet “bag-shaped” fried tofu. Inari sushi is often a popular dish inside the bento box for sports day at school. Since inari sushi is often made only with the bag and the rice, it’s usually already vegan!

“Chirashi” means “to sprinkle.” This kind of sushi is often made for celebration, like girls day in March and birthday. Sushi rice is mixed with various ingredients like carrots, shiitake mushrooms, bamboo shoots, and lotus roots. Then, bright yellow egg strips, vibrant green snow peas, and decadent salmon roes are “sprinkled” on top.

Oshi Zushi is a pressed sushi cake. The end product looks professional, but it’s not hard at all to make this sushi at home. You can use any ingredients you want to make this beautiful and tasty sushi cake.

You might think that sushi is only eaten at restaurants, but you can easily make it at home. Maki sushi and chirashizushi are also easy to make, but we recommend trying “Oshizushi,” which is photogenic and fun to make with friends. Many people might think that Oshizushi requires special tools, but rest assured. You don’t need special equipment as long as you have a tray or container and a bowl at home. However, of course, you may purchase Handai and Oshizushi Mold online if you’d like to make it more professional!

Learn How To Make Vegan Sushi At Home 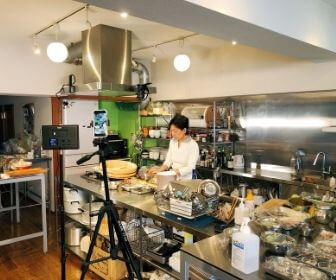 Even though you have a recipe to follow, you might need someone to guide you through making your first vegan sushi at home. Shojin Now offers online cooking classes of vegan Japanese food, and it’s highly recommended! Ms. Izumi Shoji is going to be your instructor. She is a renowned chef who is a pioneer within the Japanese vegan industry. Her sushi cookbook using vegetables is worth a read as well. Since it’s an online class, you can take her class anywhere in the world! Check out the oshizushi online class here!

The concept of “Plant-based” lies in paying attention to sustainability for a better future. There are countries where plant-based culture has existed for a long time and is now deeply rooted in its culture. One of them is Japan. If you look at history, Shojin (plant-based) culture in Japan has existed for centuries. For the last 1200 years, Japan has thrived on a quasi-vegetarian lifestyle. Here at Shojin Now, we offer you the traditional Japanese art of Shojin refined through a modern perspective, hence the name “Shojin Now.” From tradition to innovation. A project to learn and share with the Shojin Now team to build a more sustainable future.

Meet Konjac Grain (Shirataki Rice), a healthy ingredient that elevates your everyday dishes, such as salads and soups. Discover why you want to try this ingredient today!

Aichi prefecture offers a unique culinary experience rooted in its rich Samurai culture and history. Find out what Samurai cuisine is and what kind of regional cuisine it offers.

Both Shiro dashi and mentsuyu are versatile Japanese seasonings extremely useful in everyday cooking. The usage goes beyond making noodle soup. Find out why having these seasonings will make cooking easy.