Teenage Chef’s Innovative Approach on How to Make Ramen

“I love what I’m doing – we show ourselves through our bowls (of ramen)!” Young chef’s eyes sparkled when he talked about his devotion to the ramen world. Josh Reisner, a rising culinary star from MasterChef Junior, spends his daytime at a school like other common 15-year-olds but dedicates the rest of the days to the kitchen thinking about how to make ramen that is unique and delicious.

Growing up with his foodie parents in Forest Hills, Queens, Josh began his gourmet journey since a very young age. He took the first bite of solid food at only 4 months old – a piece of ikura (salmon roe) as his initial taste of Japanese flavors – and started dining at fine restaurants by the age of 3. This early exposure to culinary treats helped Josh to develop his palate. The talented chef could clearly distinguish the ingredients in a dish and remember almost every single food he has had.

Venture into the Ramen World

Josh is best known for his specialty and interest in ramen. But how come a native New Yorker finds a connection with such a typical Asian cuisine? When talking about his ramen passion, Josh recalled his first trip to Tokyo in 2013, where he tasted the authentic miso bowls. “I always loved ramen, but the trip was how I discovered ramen could be so rich,” he said. “It’s not just the noodle or the soup, each bowl had a different undertone and flavor.” This trip sparked his earnest curiosity of the food and made ramen his favorite cuisine ever since.

Josh traveled to Japan again with his family in summer 2017. This time, amazingly, he tried more than 30 bowls of ramen within the three-week journey! To this absolute ramen connoisseur, those impressive bowls made the latest Japan visit his “best trip ever.”

“I’m Trying to Expand the Boundaries of Ramen”

This junior chef never restricts himself to the existing ramen types. He is full of innovative ideas and actively considering how to make ramen with new concepts and unique approaches. One of his primary desires is to incorporate seasonal greens into the bowl, which he calls it “farm to table.” This creative ramen maker always finds his joy shopping at local farmers markets to collect inspirations for his next cooking. What matters the most to him, he said, is to take one vegetable as its optimal time and put optimal care to it.

Besides seasonal vegetables, he is also passionate about integrating western techniques and reusing left-overs.

Josh’s original motivation to change ramen traces back to his profound love for the food. “I love ramen so much, that I want to provide another outlook for people to venture into the world of ramen and discover the differences.”

Young Chef’s Tips on How to Make Ramen

Ever wonder how to make ramen as good as in the restaurants? Eager to learn how Josh creates new styles? Our talented young chef shared some of his cooking tips to make a perfect bowl of ramen:

There are five basic elements in ramen: soup, tare (sauce), topping, noodle, and aroma oil. Most people forget the last part when cooking ramen at home, but adding it will totally enhance the entire bowl.
If you are making your own soup, you can take the fat from the top and put it in a pan, add some garlic and onions, strain the oil, and put that on top of your ramen bowl.

Shio Ramen is the Best Type to Practice Skills

Shio (salt) is probably the simplest type of ramen, but it’s also the most difficult to succeed. Because it’s so light and simple, you need to work with fragile ingredients and carefully control every single variable. If you mess up one part, you will likely end up ruining the whole bowl. Shoyu (soy sauce) ramen, to the contrary, is easier to handle for beginners. Because soy sauce covers the major flavor, it won’t be as harmful if you mess one element. In short, when you wish to challenge and improve skills, make Shio; looking for an easy attempt, make Shoyu!

Ramen is All about Balance

Once you know the basics of how to make ramen, you can be creative and add your choice of ingredients. But before you mix everything, think about what ingredients go well together and how to make taste flow smoothly. The most important thing is to taste what you have, pay attention to small details – from the noodles to the tare, from the size of toppings to the time of boiling – and adjust to make sure every single element is in balance.

It is another cooking tip, and it’s also Josh’s unwavering belief 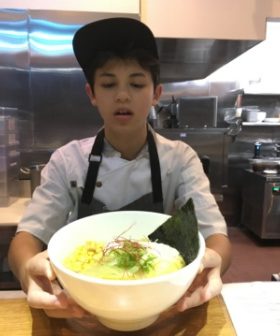 throughout his ramen journey. While he is vigorously establishing his personal style, he continued learning how to make ramen in the traditional way. The teen chef expressed his sincere respect to the Japanese culture and his eagerness to understand the history behind ramen. He considers absorbing the standard ramen basics as the fundamental step of creating something new. “I need to know the boundaries before I can push further,” he noted.

After realizing his early passion for ramen, Josh has apprenticed to the finest ramen masters in the city. His mentors and collaborators, to name a few, include Kenshiro Uki from Sun Noodle, Keizo Shimamoto from Ramen Shack, and Hideto Kawahara of Hide-Chan Ramen in Japan. In summer 2017, Josh also received systematic training at the Rajuku Ramen School in Sagamihara, Japan, for the authentic skills and recipes.

Besides discussing and consulting techniques with his ramen mentors, Josh never hesitates to serve them his new-style ramen. He described the incomparable thrill when mentors finished his creative ramen bottom up: “The empty bowl made me so happy! It’s the number one compliment that, to me, is awesome!”

Josh has practiced his creative ideas through various pop-ups, where he designed original menus and served his own style of ramens. In the past few years, this teen chef has accumulated a rich experience of putting together craft ramens and dealing with real-time challenges. At his first pop-up booth, for example, Josh collaborated with two chefs in a 4-square-foot kitchen to cook two ramens and four sides for 80 people, for two rounds, with insufficient tableware and customers with food allergies!

Josh described his first pop-up as a “crazy” experience, but the challenge never diminished his enthusiasm for hosting more. He enjoyed every unique collaboration and appreciated the growth each has brought to him. “Pop-ups are extremely important, and I will never stop doing it,” he assured.

Josh will host another pop-up at Ramen Lab by Sun Noodle, in association with the upcoming Ramen Summit 2.0 at the AnimeNYC convention, where he will collaborate with two other ramen enthusiasts. With a confident smile, Josh revealed that he already had two of the three dishes in his mind.

Aspirations to the Top

Despite his young age, Josh already has an ambitious goal and matured plans toward his future career. His aspiration goes beyond cooking techniques to the overall business management and hospitality. He expressed that his ultimate goal is to have his own restaurant “with the growth and fame like Momofuku, progression, and sustainability like Noma, and hospitality of Eleven Madison Park – but ALL IN ONE!”

This teenage chef will keep busy with a fully packed cooking schedule this month (November 2018). He has a forthcoming pop-up, a ramen panel, and the annual Thanksgiving family dinner that he’s been cooking since he was 6 years old, all in a row. On top of all these, he also cooks three to four meals a week at home as he always did since the MasterChef Junior. “I’ll be crazily busy and tired, but it’s fun!” Josh said excitedly. He described cooking as his best way to relax, as whenever he gets tired, he makes food. “There’s never been a point where I don’t want to continue cooking. It’s always been I want to do this more!” 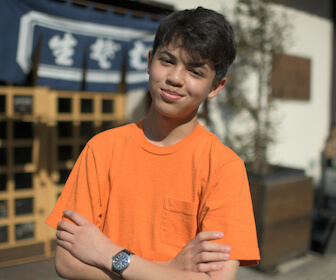 Josh Reisner is a professional chef based in New York. He is 15 years old but has been bustling about in the kitchen for two-thirds of his life! He started cooking since 5 and became a promising star in the culinary world at the age of 10 after he made it into the Finalist of FOX’s MasterChef Junior television show. Josh has a fervent enthusiasm for ramen. Since 2013, he has been staging (interning) at well-known ramen restaurants in the city, holding ramen demos at food festivals around the country, teaching ramen lessons in cooking camps, and hosting pop-ups with like-minded ramen devotees.

Umami Insider interviewed Nobu from Yama Seafood, a master of seafood behind the delicious fish you eat at notable restaurants in tri-state and beyond. Find out what makes Yama Seafood one of the best in the seafood industry.

With these meal kits, you can now easily make three popular Japanese dishes in no time. They are all vegetarian-friendly! Pick up your favorite produce items to make a Japanese meal at home.

You can make much more than miso soup with miso paste. Try our five easy recipes that use miso paste to expand your cooking repertoire. Once you're used to using miso, you can surely apply it to many more recipes.